Ripsnore is an anti snoring mouth piece that is entered on the Australian Register of Therapeutic Goods as a Class 1 Medical Device under number ARTG#156350.The Ripsnore is made of Dynaflex Plastic and BPA free. It has a high success rate and is sold in over 750 chemists and pharmacies around Australia. This product is design registered here in Australia.

In the anti snoring market there are a range of other mouth pieces, snore rings, straps, strips, pills and sprays all with minimal success rates. The proven success of the Ripsnore, which puts it in a class above other products,is it targets the area where snoring comes from at the back of the throat. The Ripsnore when fitted will hold your lower mandible in a slightly forward position and open up the airways, which will alleviate the snoring. There are many medical studies that show the proven effectiveness of using a mandibular advancement device (MAD) in the aid of snoring relief. Such articles have been published in the European Respiratory Journal http://www.ersj.org.uk/content/11/2/447.full.pdf and indicate that devices that function similarity the Ripsnore, help reduce snoring in most patients.

RIPsnore is supported by medical, dental, and pharmaceutical practicians alike in Australia, USA, Canada. Many of these have trialled and continue to use the device themselves. The Ripsnore is also mentioned in university lectures by prominent professors as a primary and ‘First Step’ solution for snoring as it is cost effective in comparison to orthodontic mandible splints.

The company comprises two brothers David Campbell Founder & current CEO and Rohan Campbell, Business Development/National Account Manager who joined in 2012. Also assisting there are 10 staff members in addition to local representatives and suppliers in Canada, the United States, and Britain. The Campbell family is not a newcomer to mouth piece/guards and the dental industry, as their family has a long history in the business. For years, their grandfather operated the largest dental supply company in Australia of which David and Rohan were later Directors as well as their mother – a qualified dental practitioner.

In 2007, David created the Ripsnore in order to solve his own snoring problem. Utilising his skills and knowledge as an engineer, he developed this device with the help of his family who all together have been in the dental business for over 80 years. His wife, Jennifer, is credited with naming the device.

Since January 2013 Rohan introduced the Ripsnore device to chemists around Australia with incredible response. He identified an opportunity in the market with the lack of anti snore products that ‘actually work’ for the customer. Ripsnore has received thousands of testimonials from satisfied customers saying the Ripsnore not only stopped their own snoring but saved their relationship!

2 years later the company now resells throughout 750 chemists around the country and interest continues to grow both locally and internationally.

The Company plans to continually refine and improve the device and is forecast to double the retail outlets in Australia and New Zealand in the next 12-24 months and explore ever growing demand from abroad. 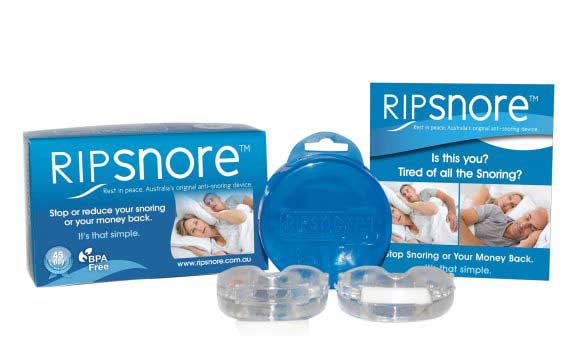 Ripsnore is an anti snoring mouth piece that is entered on the Australian Register of Therapeutic Goods as a Class 1 Medical Device under number ARTG#156350.The Ripsnore is made of Dynaflex Plastic and BPA free. It has a high success rate and is sold in over 750 chemists and pharmacies around Australia. This product is design registered here in Australia.

Sleep with satisfaction. Click here to listen to customer review with Ray Hadley on 2GB Sydney.